Winning at the Game of Hotels

This is the story of how the Brazilian National Team beat their Haitian counterpart before the game even started at the recent Copa America Centenario Football Soccer tournament.

In the group stage of the tourney, teams were split into groups of four, with teams playing one another. Haiti, a team with limited history of success in the sport, held very little chance in the group they drew that included the perennial power Brazil. 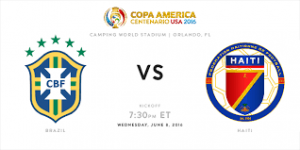 The day of the Brazil-Haiti match, I happened to be staying at the same hotel as the team from Haiti. I was invited to present at the Florida Institute of CPAs Mega CPE Conference, which was at the same venue, a prominent resort and conference center. I ran into a member of the Haitian medical team and congratulated him on a fine game they had a few days ago – a narrow 1-0 loss at the hands of Peru’s National Team, which included a last minute miss from Haiti that would have tied the game. I wished him and the team luck in the game coming up that same evening, against Brazil. It occurred for me to ask, “So is Brazil’s team also here in the hotel?” “No, they are staying at the Ritz Carlton”, he replied in a deflated, demoralized tone.

There was the palpable perception in the voice of the Haitian team member that Brazil was better, more deserving of the higher end Ritz Carlton. There was a feeling of submission, of resigning to the fact that Brazil is a bigger power in the sport. Result: Brazil 7 – Haiti 1. (For those that understand football soccer, that is as lopsided a win as you can have, akin to winning by a score of 70-10 in American football.) The single goal scored by Haiti was celebrated in exuberant fashion by the entire team in the same way a team celebrates winning a championship, as if they finally accomplished their goal (pun intended). Mind you, the goal came when the team was already down 5-0. Still, the celebration went around the stadium, including Brazil fans just being happy for the underdog.

That winning before the game attitude can be transposed to many courses of life. Before a large task, an important meeting, a complex presentation, you can beat the situation before the situation – by communicating to others about your deserving position, because of the perception you are going to win.

Lesson here is that Brazil did not field a typical dominating team for which they are known. Yet they were able to win in imposing fashion because of perception. They won before the game.

Sometimes perception counts more than actuality. It is good to be a subject matter expert. But sometimes it is more important that others simply have the perception about your grand expertise. Winning the game before the game – prevailing by perception.

Mario Nowogrodzki, CPA.CITP, is founder and principal of Mendelson Consulting (www.mendelsonconsulting.com), an accounting technology firm that assists entities with planning, selecting and implementing business management systems. The firm was selected as Top Technologist by the Sleeter Group and Top Integrations Advisor by Insightful Accountant. Nowogrodzki is a member of the Florida Institute of CPAs Business Technology Section; a contributing author and speaker for Intuit, Accountex, and the Woodard Group. Contact him at mario@mendelsonconsulting.com or at 954-447-0250.

Feel free to give us a call.

We look forward to hearing from you!